Research results of Knight Frank Chartered (Thailand) Co., Ltd. in regards to the market for ready built factories for rent in the first half of 2015 showed that the supply of such factories was at 2,607,014 square metres, with 58,927 square metres of new supply. Around 2,010,098 square metres have been rented or 71.1 percent of the total supply, which represented a decrease from 77.6 percent in mid-2014. 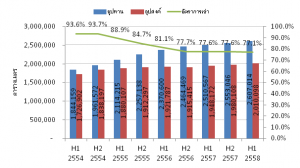 Miss Risinee Sarikaputra, Director, Research and Consultancy at Knight Frank Chartered (Thailand) Co., Ltd., revealed that, despite the drop in the occupancy rate, there were three areas with an increase in factory space for rent, namely, Ayuthaya, Samutprakarn and Chonburi. For the ready built factory space in Ayuthaya, 16,643 square metres have been rented. In Samutprakarn and Chonburi, this figure stood at 12,774 square metres and 12,631 square metres, respectively. All three areas are situated close to Bangkok as well as production hubs, especially Samutprakarn and Chonburi with many industrial parks and proximity to Laem Chabang Deep Sea Port. Ayuthaya also contains many factories in various industrial parks. The ready built factories in these areas have been of particular interest to small scale factories engaged in spare parts production, thanks to the convenience in sending their products to the larger factories for further processing. The area with the most vacant ready built facotry space was in Rayong province, with up to 197,499 square metres of vacant space. This was followed by Ayuthaya province with 167,762 square metres of vacant factory space. As for Chonburi and Samutprakarn, there were just 41,457 and 39,661 square metres of vacant factory space, respectively.

The new supply of ready built factories in the first half of 2015 included 53,968 square metres. The area with the largest increase in supply was in the Sautprakarn area, with 29,058 square metres of new space. This was followed by the Saraburi and Prachinburi areas.

Miss Risinee also offered the opinion that the Samutprakarn area was of great interest for rental warehouse space due to an increase in occupancy rates from 2014 to mid-2015, from 78 percent to 83.5 perent. Also, there was a take-up of 47,249.5 square metres in the first six months of 2015. In mid-2015, there was an increase of 18,277 square metres of new supply in Samutprakarn.

As for Chonburi, there was 22,090 square metres of new warehouse supply, a significant increase. The occupancy rate thus dropped from the end of 2014 to mid-2015, from 67 percent to 63.1 percent. In Ayuthaya province, it was found that the occupancy rate dropped quite a lot. From 2014, the rate fell from 84.9 percent to 74.9 percent.

As for rents for warehouses, the east of Bangkok, which encompasses Lat Krabang, Bangna-Trat Road and Samutprakarn province, commanded the highest rents at 162.7 to 169.7 baht per square metre. In the Eastern Seaboard, including Chonburi and Rayong, the average rents were around 148.9 baht per square metre. On the whole, rents were stable, without upward adjustment, due to the relatively large increase in warehouse supply which boosted competition in the warehouse market sector. 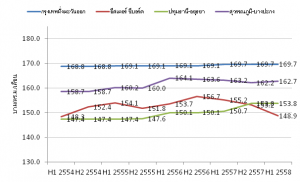