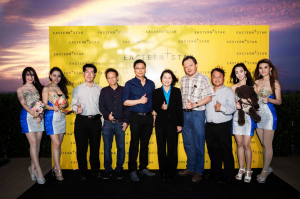 Khun Rattanachai Phatinawin, Managing Director of Eastern Star Real Estate PCL (5th from the left), along with a team of executives, including Khun Phanom Kanjanathiemthao, Managing Director of Knight Frank Chartered (Thailand) Co., Ltd. (4th from the right), recently hosted the “Open House StarView by Eastern Star” party by the edge of the 100-plus metre long swimming pool on the 44th floor of StarView. The event offered customers a look at an actual unit in the luxury condominium project, which boasts views of the Chao Phraya River. Customers were also able to take in 360-degree vistas of the Bangkok cityscape.

Open House StarView by Eastern Star attracted over 360 customers. On the whole, they were delighted by StarView, which affords a distinctive architectural style and aesthetic, as well as ample world-class amenities. Also, the prime location on Rama 3 Road parallel to the Chao Phraya River allows for seamless access to Sathorn, Silom and the Expressway. Currently, the project is almost 100 percent complete. It will be ready for occupancy in December 2015. StarView features 2 buildings of 44 and 54 storeys in height. They are situated on over 7 rai of land and have a project value of over 3.5 billion baht. All units include 2 bedrooms, and range from 77 to 82 square metres in size, with a comfortable, home-like feel amidst a community of considerable stature. The target customers include a new generation of people who are well educated, with good professional prospects. They also like convenience, healthy pursuits and value for money, while enjoying vibrant and modern urban lifestyles.

Recap of Bangkok Luxury Hotel Market 2021 and Outlook in 2022

Condominium Market in Cha-am Hua-Hin Khao-Tao Area, as of H2 2021

Where to invest: London’s 2022 rental hotspots seeing surge in demand